Targeted testing in healthcare settings, such as HIV Indicator Condition (IC) guided HIV testing has shown to be an effective and cost-effective testing strategy supported by many European countries, and is also included in the ECDC 2010 HIV testing guidance. However, testing rates in well-established HIV Indicator conditions remain unacceptably low, reflecting missed opportunities for earlier diagnosis. As an example, all patients presenting with STIs, TB or hepatitis ought to be routinely offered an HIV test, in the same way as most countries routinely offer HIV tests to all pregnant women, but this is far from being the case.

INTEGRATE will support expanded IC-guided HIV testing in health care settings in high priority countries and further adapt tools and materials initially developed for HIV testing to support testing for STIs, hepatitis and TB and promoting these across Europe.

INTEGRATE will pilot ways to ensure adequate confirmatory testing and linkage to care for self-testers, and explore potential for expanding self-testing and home-sampling for STIs and HCV which also have rapid testing technologies.

Testing and early diagnosis, and subsequent linkage to treatment and secondary prevention services is key to controlling the epidemics and will be the focus of INTEGRATE. European Testing Week (ETW) is an annual initiative (since 2013) aiming at promoting HIV testing and (since 2015) viral hepatitis testing across Europe. ETW provides and maintains a portfolio of resources for use by community organisations and healthcare professionals, such as publicity materials, information leaflets, and risk groups specific materials – all freely accessed via website. ETW targets policy organisations, health care institutions and NGOs and it gives participating organisations the chance to increase focus on testing on different levels. Over 500 organisations across Europe have participated and many others have registered their support including WHO, ECDC, EACS, UNAIDS and EATG.

INTEGRATE will support the revision and adaptation of these materials to include STI testing during ETW in 2018/2019, in addition to testing for HIV and viral hepatitis.

As testing programmes expand and become integrated, it is vital that progress is monitored locally and nationally. In spite of a gradual increase in countries conducting monitoring and surveillance, difficulties remain in monitoring performance of testing programs at all levels and linkage to care due to significant gaps in the data available. In particular the existing separation of datasets between national surveillance and community based testing sites undermines the ability of all stakeholders to understand and assess the opportunities and challenges facing testing programs.

INTEGRATE will address some of these challenges and opportunities by identifying processes that can facilitate the integration of testing and linkage to care data for HIV, Hepatitis and STIs into surveillance and M&E systems, helping to produce meaningful national datasets that capture the activities of the various organisations conducting testing, such as Community Based VCT settings (CBVCT) and health care settings and strategies highly popular such as the European Testing Week (ETW).

An integral part of monitoring the effectiveness of interventions to increase testing, diagnosis, and linkage to care is monitoring patient experience and outcomes. In a patient-centred approach, patient outcomes are not just clinical metrics, but also patient-reported measures such as satisfaction with service and quality of life. Understanding the barriers to testing and linkage to care experienced by patients is needed to identifying areas for improvement and gaps in the patient pathway.

INTEGRATE will explore the possibilities of using secure and anonymous patient surveys, to provide insights into barriers to testing, ease of linkage to care and subsequent access to treatment and experiences in the health care setting. Linking these with clinical metrics and measures of overall well-being using validated quality of life measures will form a fundamental part of designing interventions that are appropriate, sensitive, and meet the needs of affected populations.

Reviews examining effective HIV/STI prevention strategies for the different key affected groups indicate that a combination of social change and use of communication interventions using information and communication technology (ICT), designed for specific populations and contexts, have enhanced the adoption of prevention behaviours and the uptake of services.

INTEGRATE will draw on existing tools and experiences to extend and adapt best practice ICT-based prevention packages which have proven effective for HIV to viral hepatitis, STIs and TB where feasible by promoting integrated approaches and building on experiences of other European projects.

Active case finding, contact tracing and/or assisted Partner Notification have been important public health approaches in infectious disease management for decades within HIV, viral hepatitis, STI and TB programmes and has shown to be effective in diagnosing and preventing onwards transmission and recurrent infections.

INTEGRATE partners Jordi Casabona, Irena Klavs and Dorthe Raben participated in the ECDC Dublin Declaration meeting in Stockholm. Results from the JA's pilots and the indicators developed were presented to the Dublin advisory group for the preparation of the Dublin Declaration Questionnaire 2020. 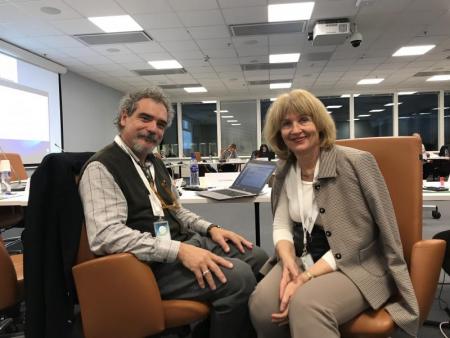