INTEGRATE has worked on optimizing and support the normalisation of testing and linkage to care for HIV, viral hepatitis, TB and STIs and through the adaptation and implementation of relevant innovative tools to support health care and civil society staff in offering testing across Europe and in different settings, specifically health care settings and community settings. Further INTEGRATE has worked with expanding self HIV self-testing and Home sampling. All tools and pilot cases studies are available on the website: https://www.eurotest.org/Testing-Tools And listed below here:

Targeted testing in healthcare settings, such as HIV Indicator Condition (IC) guided HIV testing has shown to be an effective and cost-effective testing strategy supported by many European countries and is also included in the ECDC 2010 HIV testing guidance. However, testing rates in well-established HIV Indicator conditions remain unacceptably low, reflecting missed opportunities for earlier diagnosis. As an example, all patients presenting with STIs, TB or hepatitis ought to be routinely offered an HIV test, in the same way as most countries routinely offer HIV tests to all pregnant women, but this is far from being the case.

Testing and early diagnosis, and subsequent linkage to treatment and prevention services is key to controlling the epidemics. European Testing Week (ETW) is an annual initiative (since 2013) aiming at promoting testing for HIV and viral hepatitis in Europe. INTEGRATE has in collaboration with ETW implemented the Spring European Testing week as a second annual testing week in Europe.

INTEGRATE has adapted resources initially developed for HIV testing, such as publicity materials, information leaflets, and risk groups specific materials, to include testing for viral hepatitis and STIs. The new tools and materials have been piloted in community and low threshold testing services across Europe.

HIV home sampling and home-testing and linkage to care toolkit

The INTEGRATE Online learning module on Public Health perspectives: prevention, testing and linkage to care is now available from iversity (search for ‘management of HIV and co-infections’ and sign-up to access the course). You can follow the entire course or choose the sections most relevant to you. The module has been developed in collaboration with the EACS Society and WHO Regional Office for Europe as part of the Management of HIV and Co-infection course. Read more about the whole course here https://www.eacsociety.org/education/online-course/

INTEGRATE Joint Action has been the first EU funded European project on integration of infectious diseases in testing services, data collection and country response. Findings and lessons learned from INTEGRATE have been published in 10 articles in a BMC infectious Disease supplement.

Read more about integrated testing in community and health care settings, HIV self-testing, combination prevention and use of web and mobile applications to enhance combination prevention, integration of data sources and how to foster collaborations at national level across disease areas.

The full content of the supplement can be found at https://bmcinfectdis.biomedcentral.com/articles/supplements/volume-21-supplement-2. 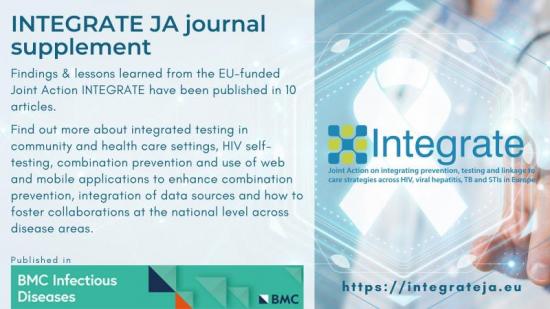